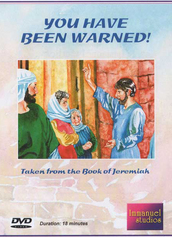 You Have Been Warned.
Taken from the Book of Jeremiah, this Bible Lesson centres around three events in the ministry of this great prophet.
Sent by God to observe a potter at work, Jeremiah is told to deliver a message of impending judgement if the nation will not repent of its sin. A broken jar illustrates the effect of judgement - a nation destroyed! Later the king himself shows contempt for the Word of God by burning it. Throughout the lesson, Bible truths such as the holiness of God, His love for sinners and the need for repentance, are presented to the child in a relevant and challenging way.
Duration:  18mins. 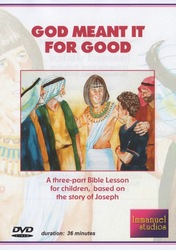 God meant it for Good.
The story of Joseph, as recorded in the Scriptures, is one of the most thrilling and challenging, and sets forth an example of a man who feared God. Hated by his brothers who sold him as a slave and imprisoned (possibly for 8-10 years) for a crime he did not commit, Joseph steadfastly set his hope in God. He proved that 'all things work together for good to them that love God.' Many lessons can be drawn from the story and this DVD seeks to present some of them. The teaching is aimed at children from 5 years of age up to young teens. To be true to the Scriptures and because the present moral climate demands that these things be taught, the incident involving Potipher's wife has been included.
​A 3-part lesson.  Total duration:  36mins. 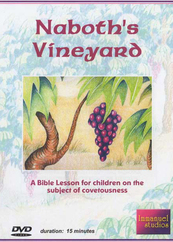 Naboth's Vineyard.
'Thou shalt not covet' is an oft neglected commandment, yet it is as relevant today as when it was first given. We live in a society which is never satisfied, however much it has. What kind of example are our children following? God's word to Timothy through the Apostle Paul was, 'Godliness with contentment is great gain.' This story about King Ahab and Naboth's Vineyard may not be so familiar to some, but it carries a message which is very appropriate for today. Ahab's covetousness, Jezebel's cruel plotting and God's message of judgement through Elijah, all add up to an intriguing and challenging story. And it's true!
Duration:  15mins. 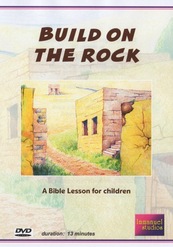 Build on the Rock.
So often in the Word of God we are faced with an 'either - or' situation. The Lord Jesus Christ - the WORD made flesh, was uncompromising in His declaration of what was required of the citizens of his Kingdom. Either you listened and did what He said or you faced the consequences! The familiar illustration of two men who each built a house, is a timely reminder to take heed to the teaching of Jesus and apply it to our lives. 'Not every one that saith to me, Lord, Lord, shall enter into the kingdom of Heaven, but he that doeth the will of My Father which is in Heaven.'
Duration:  13mins. 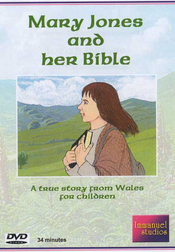 Mary Jones and her Bible.
The story of Mary Jones is one which needs to be re-told to children of every generation. Born into a humble, though Godly home in 1784, Mary came under the influence of the Gospel. Although the time of her conversion is not certain, from around the age of 10 a desire to have a Bible of her own was born in her heart. After six years of saving she walked to the town of Bala, 25 miles away, to buy a Bible from a Mr Charles. Initial disappointment turned to joy as Mary returned home with her prized possession. The narration for this lesson was adapted from the original story published by the Bible Society in 1884, the centenary of Mary's birth. The lesson has short breaks dividing it into 6 parts if required.
Total duration:  34mins. 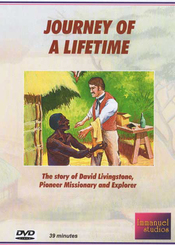 Journey of a Lifetime.
David Livingstone was born in Blantyre, just outside Glasgow in Scotland. Brought up in a Christian home, he put his trust in Christ as his Saviour at the age of sixteen. He began to pray for and give towards missionary work, but soon realised God wanted him to go himself. Having trained as a missionary doctor, he was eventually accepted by the London Missionary Society for work in Africa. He left England for Cape Town in December 1840 and there began what must be one of the greatest pioneering missionary works of modern times. For over 32 years David preached the Gospel, attended the sick and explored a vast area, seeking new routes whereby future missionaries could reach the Africans with the Gospel. In 1873 David died and his body was carried for over 1000 miles to Zanzibar, from where it was brought to England. His remains are buried in Westminster Abbey in London. The lesson has short breaks dividing it into 5 parts if required.    Total duration:  39mins. 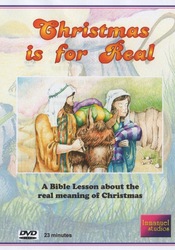 Christmas is For Real.
The true meaning and purpose of the birth of the Lord Jesus Christ have all but disappeared from what used to be a 'Christian' nation. This lesson is aimed at children of primary school age and seeks to present the coming of the Saviour as God's remedy for sin. It challenges the children to consider their relationship to God and encourages them to accept the 'gift of God which is eternal life through Jesus Christ, our Lord.'
Duration:  23mins. 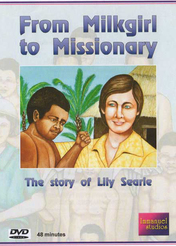 From Milkgirl to Missionary.
At an early age, Lily trusted the Lord Jesus as her Saviour and after hearing a missionary tell of children in India and Africa who had never even heard of Jesus, she knew that God wanted her to be a missionary. She left school at the age of twelve and helped on her father's farm and with a milk round. In spite of the hardships and disappointments, her call was eventually fulfilled and after Bible training, she was accepted to work with WEC in the Congo. There she met and married Charlie. After eight years and with failing health, they returned to Britain and eventually started the WEC home for missionaries' children in Arbroath, Scotland. Lily passed into the Lord's presence in January 2003. We are grateful for the use of family photographs in this presentation. The story has short breaks allowing it to be divided into 5 parts.     ​Total duration:  48mins. 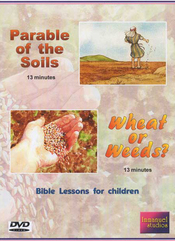 Parable of the Soils / Wheat or Weeds.
This DVD has 2 short lessons.
The parable of the soils is the first parable recorded in Matthew ch. 13, in which the Lord Jesus uses an illustration familiar to His hearers. Although farming practices have changed somewhat, the message is still clear and timeless in its application. The four soil types are representative of those who hear the Word of God and respond to it in different ways. How we respond determines where we stand in relation to God and whether or not His will is fulfilled in us. Wheat or Weeds highlights the fact that there are only two kinds of people in the world - those who are the children of God and those who are the children of the wicked one, the devil. It is a hard truth indeed, but these are the words of the Son of God. In both instances, Jesus gave the interpretation which leaves no room for doubt or misunderstanding. The lessons contain a clear Gospel presentation.   Duration:  13mins each. 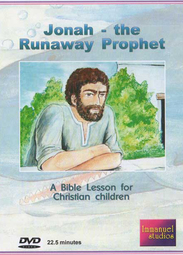 Jonah, the runaway prophet.
'Jonah and the whale' is one of the better known Bible stories, but the reason why it is included in Scripture is often overlooked. Jonah's attitude to the Ninevites was at variance with God's love for them. The fact that they were old enemies of God's people made Jonah rebel against God's revealed will. 'Why should they be spared?' he reasoned. How do boys and girls feel about those who are unfriendly or unkind? This lesson seeks to show that God loves all people and desires that 'all should come to repentance.'  Although the Gospel message is included, the lesson is primarily for Christian children, to encourage and challenge them in their responsibility to tell others about the Lord Jesus Christ. The lesson can be shown in 2 parts.
Duration:  22.5mins.